Keeping the neighbours quiet: A lesson from C. elegans in using what you have to hand 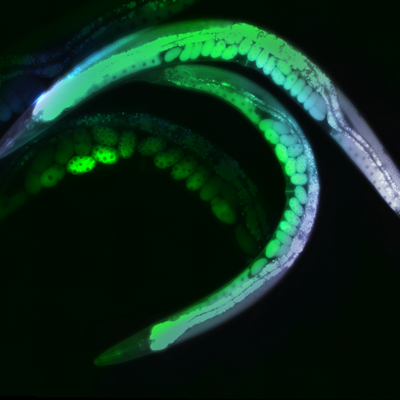 Researchers from the Institute of Molecular Biology (IMB) in Mainz have uncovered a new evolutionary origin for the anti-parasitic genome defence system, piRNAs, in worms. In their research paper published in Genes and Development, the group of Prof. René Ketting describe how the piRNA pathway in C.elegans developed out of a more ancient, evolutionarily conserved protein system that is needed for correct gene expression. While studying the piRNA system in the small nematode C. elegans, the group discovered a new protein complex essential for their production, which they called PETISCO -tapas in Portuguese. This protein complex appears to have two distinct functions, flavours, that are determined by its interaction partners, PID-1 and TOST-1. PID-1, in evolutionary terms a relatively young protein, uses PETISCO to make piRNAs, while TOST-1, a genetically older protein, has a gene expression function. While TOST-1’s function still needs to be molecularly defined, it appears to be involved in producing small RNA molecules needed to join gene segments together to create a functional transcript. The results strongly suggest that this latter, essential PETISCO system has been coopted later during C. elegans’ evolutionary history to produce piRNAs. Indeed, this new finding highlights how evolution can build on existing structures to derive novel effective parasite-control systems. For the full press release click here.
back