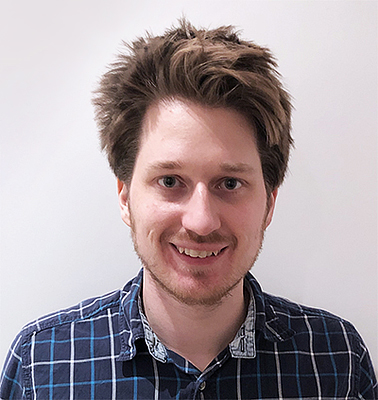 12 May - The Institute of Molecular Biology (IMB) is delighted to welcome Lukas Stelzl as an Associate Group Leader. Lukas joins us from the Max Planck Institute of Biophysics in Frankfurt, where he worked as a postdoctoral fellow. Lukas’ field of expertise is liquid-liquid phase separation and how this regulates gene expression in development and disease. He is also a junior group leader in the ReALity initiative (Resilience, Adaptation and Longevity). ReALity promotes excellence in research aimed at understanding how molecular and cellular systems react and adapt to existential threats of intrinsic and environmental origins to maintain homeostasis and promote longevity.

Liquid-liquid phase separation (LLPS) is a phenomenon where biomolecules (e.g. proteins or nucleic acids) condense to form droplets within a solution, similar to the demixing of oil and vinegar in a vinaigrette. In cells, this allows biomolecules to be physically separated from the surrounding cytoplasm and condense to form membraneless organelles with specific functions, such as the nucleolus, stress granules and germ granules. LLPS thus helps to organise functions such as gene transcription in time and space and is critical for proper cell function.

LLPS is facilitated by interactions between so-called disordered proteins, which are flexible and have no fixed structure. Many factors can affect the interactions between disordered proteins, such as mutations or posttranslational modifications that modify the structure, hydrophobicity and charge of the protein. Lukas and his lab study how LLPS provides robust gene regulation in development, as well as how posttranslational modifications and mutations in disordered proteins can dysregulate LLPS in ageing and disease. They do this by using in silico simulations to model interactions between disordered proteins. This computational approach can reveal information about biochemical interactions at the atomic level, which could not be otherwise observed, and helps scientists to better understand their experimental results in the lab. By studying the underlying principles of LLPS, Lukas and his group gain insights into how cells maintain precise control of biological functions, as well as how this regulation is disrupted in disease.

Lukas is an Associate Group Leader at IMB and a ReALity Junior Group Leader at Johannes Gutenberg University Mainz. Further information about research in Stelzl lab can be found at www.imb.de/stelzl. The Stelzl lab is supported by ReALity and the M3ODEL Mainz Institute of Multiscale Modelling and Research Initiative of the State of Rhineland-Palatinate.