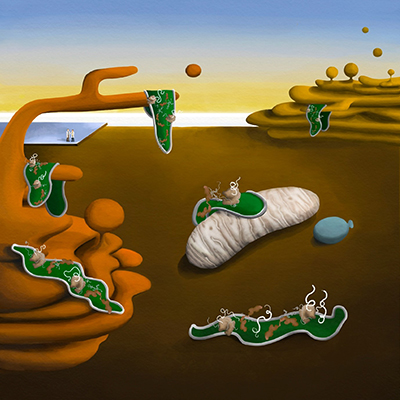 25 August – Researchers at the Institute of Molecular Biology (IMB) and Johannes Gutenberg University Mainz (JGU) have developed a method to engineer new functionalities into cells. The results were published today in the journal Cell in the article "Dual film-like organelles enable spatial separation of orthogonal eukaryotic translation".

Numerous processes occur inside living cells, from DNA replication and repair to protein synthesis and recycling. In order to organise this plethora of reactions, they must be separated in three-dimensional space. One way eukaryotic cells do this is by extruding a piece of membrane to form a membrane-enclosed space – an organelle – in which specific functions can take place. Alternatively, the cell can also segregate molecules into distinct areas (so-called membraneless organelles) through phase separation, a phenomenon similar to the separation of vinegar and oil in a salad dressing. Such membraneless organelles have advantages: as they are not separated from the rest of the cell by a membrane barrier, large molecules can get in and out more easily. Membrane-enclosed organelles therefore operate like separate “rooms” in a cell, while membraneless organelles operate like different corners of the same room.

One of the most important processes in the cell is protein synthesis, where the RNA code is translated into a protein code, which contains the blueprint for making proteins. These codes are like the languages of the cell. If an organelle could be engineered and dedicated to translate the RNA code in new ways (i.e. use a different language), the functions of the resulting protein could also be changed, endowing it with unique properties that could be used, for example, to switch its functions on or off, or to allow the protein to be visualised in living cells.

In 2019, Prof. Edward Lemke and his research team succeeded in creating an artificial membraneless organelle that translated the RNA code using a new code, or language, without interfering with RNA translation in the rest of the cell. Now Edward and a student from his lab, Christopher Reinkemeier, have further built on this success by creating film-like organelles that can be used to subdivide cell processes into even smaller spaces. "The biggest gain is that we were able to create extremely small reaction spaces – this way we can have several of them in a cell at the same time," explains Prof. Lemke. "We have converted the large 3D organelles into 2D organelles on a membrane surface, and can even run complicated biochemical reactions in these thin layers." Using these thinner organelles, the same cell can now translate the RNA code into three different languages – thus creating three different proteins – in different "corners of the same room", without the translations interfering with each other. This means that the same protein can now have three different functions, depending on which “corner” it was made in.

This novel method not only allows scientists to engineer proteins with unique functions, but also helps them to better understand how eukaryotic cell functions evolve. "We can find out more about how complicated functions occur in the membrane space, what unique functionalities the membrane has, and what special reaction spaces are created there when you concentrate proteins using 2D phase separation," says Dr Reinkemeier. "Through engineering these film-like organelles, we can also better understand how nature also uses such mechanisms to create proteins with new functions."

Cheryl Li is a Science Writer at the Institute of Molecular Biology (IMB).

Edward Lemke is an Adjunct Director at IMB and a Professor of Synthetic Biophysics at Johannes Gutenberg University Mainz. Further information about research in the Lemke lab can be found at www.imb.de/lemke