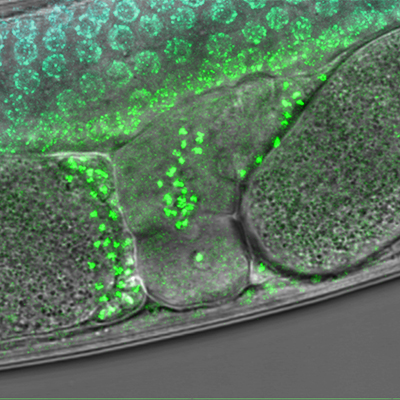 1 June – The teams of Falk Butter and René Ketting at the Institute of Molecular Biology (IMB) published a paper in Nature Communications identifying two new proteins that bind to the ends of chromosomes in the nematode worm C. elegans, a popular model organism for ageing studies.

The nematode worm Caenorhabditis elegans (C. elegans) is a versatile model organism commonly used in ageing studies. However, we still do not know all the telomere-binding proteins in C. elegans, making it difficult to study how telomeres are regulated this model. Studying telomere-binding proteins in C. elegans is important because it could give new insights into how telomeres work in different tissues of a whole organism, rather than in individual cells.

Next, the researchers wanted to find out what functions these new proteins might have in telomere regulation. To do this, they created C. elegans mutants with deletions of the genes encoding the TEBP-1 and 2 proteins. Worms without TEBP-2 had shorter telomeres than normal worms, suggesting that TEBP-2 promotes telomere lengthening, while those without TEBP-1 had longer telomeres, suggesting that this protein counteracts telomere lengthening. Interestingly, worms without TEBP-2 also had a reproductive defect and produced fewer and fewer offspring over many generations until they became completely sterile. The authors speculate that this is likely due to a defect in the proliferation of the cells that give rise to eggs and sperm. As Sabrina says, “Without TEBP-2, the telomeres are not replenished and become shorter in each generation. This leaves the chromosomes susceptible to damage, which could cause problems in cell division and result in cell death and sterility over many generations.” Worms without both TEBP-1 and TEBP-2 had an even stronger effect, with sterility occurring in only one generation.

These results shed more light on how cells protect their chromosomes from damage in this popular model organism. The researchers next plan to further investigate how TEBP-1 and 2 control telomere length and how this is linked to fertility, especially in worms without both TEBP-1 and TEBP-2.

The image above is a cropped, false-colored image taken from the original paper, which is licensed under a Creative Commons Attribution 4.0 International License.

Falk Butter is a Group Leader at IMB. Further information about research in the Butter lab can be found at www.imb.de/butter.

René Ketting is a Scientific Director at IMB. Further information about research in the Ketting Lab can be found at www.imb.de/ketting.