Adenine methylation may not be an epigenetic mark in mammalian DNA 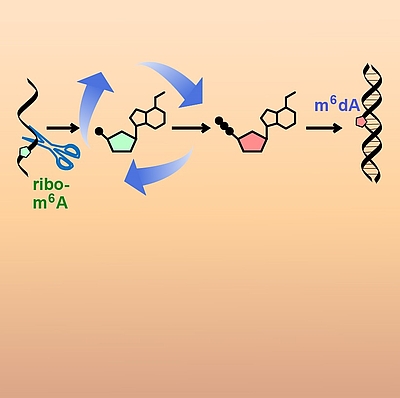 Mainz, 24 March 2020 - The team of Christof Niehrs at the Institute of Molecular Biology reported today in Nature Chemical Biology that adenine methylation—a chemical modification of DNA—may not act as a heritable epigenetic mark in mammals, unlike cytosine methylation.

Epigenetics is a key mechanism of gene regulation in eukaryotes. As such, it is essential for cell differentiation and embryonic development. Epigenetic modifications occur on histones (the proteins that package DNA) and on the DNA itself. In the latter, the methylation of cytosines is the most widespread epigenetic modification. Methylation can also occur on adenines in DNA. However, while cytosine methylation has a well-defined role in epigenetic gene regulation in mammals, little is known about DNA adenine methylation, which is found primarily in bacteria. After the discovery of DNA adenine methylation in embryonic stem cells in 2016, there has been great interest in whether it could also function as an epigenetic mark.

In their study, Christof Niehrs and his team investigated this possibility by feeding human cell lines methionine (an amino acid used by cells to methylate DNA) that had been labelled with heavy isotopes. When cells add methyl groups to adenines using this ‘heavy methionine’, the resulting methyl-adenosine is also heavier than usual. The researchers then measured the occurrence of heavy methylated adenosines in the cells’ DNA by mass spectrometry. The rate at which heavy methyl-adenosines were introduced into DNA was extremely slow – much slower than would be expected of a heritable DNA modification that is actively added to the DNA with each cell division.

If the cell does not actively add methyl groups to adenines in DNA, how does it get there? Unlike DNA, RNA has high levels of adenine methylation. The researchers hypothesised that DNA adenine methylation might originate from the misincorporation of free methyl-adenosines made by recycling methylated RNA nucleotides into DNA nucleotides. To test this, Michael Musheev, the first author of the study, fed the cells an adenosine precursor and methionine, both labelled with heavy isotopes. This allowed him to distinguish between methyl-adenosines produced by directly adding methyl groups to DNA, which would be heavier than methyl-adenosines produced by recycling RNA. Michael found that the vast majority of methyl-adenosines in DNA corresponded to the weight expected from recycling RNA, with virtually none corresponding to the weight expected from direct DNA methylation.

This suggests that DNA adenine methylation does not act as an epigenetic mark that is heritably and actively added to DNA, as is the case for cytosine methylation. As Christof says, “Mammalian DNA contains at least 5 different nucleic acid modifications, and we are only just beginning to understand their roles in the genome. However, this finding shows that not every modification necessarily has an epigenetic function – some may just be errors in DNA, and findings should always be interpreted with caution.”

For a PDF version of this press release, please click here.

Christof Niehrs is the Executive Director of IMB and a Professor of Biology at Johannes Gutenberg University Mainz. Further information about research in Niehrs lab can be found at www.imb.de/research/niehrs.

Johannes Gutenberg University Mainz (JGU) is a globally recognized research-driven university with around 31,500 students. Its main core research areas are in particle and hadron physics, the materials sciences, and translational medicine, while its most outstanding research achievements in the humanities have been attained in the fields of American Studies and Historical Cultural Studies. JGU's academic excellence is reflected in its success in the Excellence Initiative of the German federal and state governments: In 2012, the university's Precision Physics, Fundamental Interactions and Structure of Matter (PRISMA) Cluster of Excellence was approved and the funding of its Materials Science in Mainz (MAINZ) Graduate School of Excellence was extended. Moreover, excellent placings in national and international rankings, as well as numerous other honors and awards, demonstrate just how successful Mainz-based researchers and academics are. Further information at www.uni-mainz.de/eng.