May, 2013.Dr Vijay Tiwari, a Group Leader at IMB, has been awarded the Bruno Speck Award by the Swiss Foundation of Haematological Research. The award recognises outstanding work by young scientists in the fields of haematology and stem cell research. Dr Tiwari received the award in recognition of his research into stem cell differentiation and the role of direct histone modification by the signalling molecule JNK in this process. This discovery, published in Nature Genetics, provided the first evidence that chromatin can be directly affected by kinase signalling molecules. This represents a novel mechanism by which genes can be regulated. As JNK is involved with a signalling pathway that is impaired in many types of cancer, this research may pave the way for the development of new cancer therapies. The research was conducted while Dr Tiwari was studying chromatin modification in the laboratory of Dirk Schübeler at the Friedrich Miescher Institute for Biomedical Research (FMI) in Basel, Switzerland. It was carried out in collaboration with FMI’s Michael Stadler and Renato Paro from the Department of Biosystems Science and Engineering from ETH Zürich. Dr Tiwari is now continuing this research at IMB. Here his group is investigating the mechanisms by which epigenetic machinery and regulatory factors contribute to the transcriptional reprogramming that defines cell-type, and is identifying how this communication is altered in diseases such as cancer. 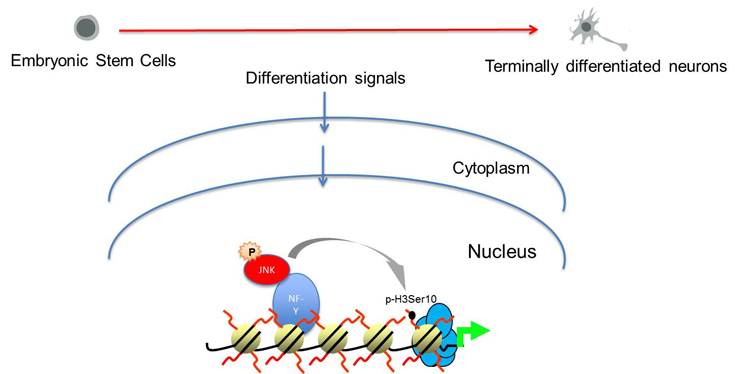 Figure 1. JNK directly modifies chromatin to mediate transcriptional reprogramming during cellular differentiation. Induction of stem cell differentiation results in JNK activation through its phosphorylation. To mediate neurogenesis this phosphorylation is followed by JNK being recruited to gene promoters where it activates target gene expression by directly phosphorylating histone H3 at serine 10 (H3Ser10).Further details
The work for which Dr Tiwari received this award was published in Nature Genetics, 44, 94-100. Further information about Dr Tiwari’s research can be found at <link http: www.imb-mainz.de tiwari external-link-new-window external link in new>www.imb-mainz.de/tiwari.  Institute for Molecular Biology gGmbH (IMB)
The Institute of Molecular Biology gGmbH (IMB) is a new centre of excellence in the life sciences which was established in March 2011. Research at IMB concentrates on three cutting-edge areas: epigenetics, developmental biology and DNA repair. The institute is a prime example of a successful collaboration between public authorities and a private foundation. The Boehringer Ingelheim Foundation has dedicated 100 million euro for a period of 10 years to cover the operating costs for research at IMB, while the state of Rhineland-Palatinate provided approximately 50 million euro for the construction of a state-of-the-art building. For more information about IMB please visit: <link http: www.imb-mainz.de>www.imb-mainz.de.  Boehringer Ingelheim Foundation
The Boehringer Ingelheim Foundation is an independent, non-profit organisation committed to the promotion of the medical, biological, chemical and pharmaceutical sciences. It was established in 1977 by Hubertus Liebrecht (1931-1991), a member of the shareholder family of the company Boehringer Ingelheim. With the “PLUS 3” Perspectives Programme and the Exploration Grants, the foundation supports independent group leaders, it endows the internationally renowned Heinrich Wieland Prize as well as awards for up-and-coming scientists. In addition, the foundation has endowed 100 million euro over a period of ten years to finance the scientific running of the Institute of Molecular Biology (IMB) at the University of Mainz. For more information about the foundation and its programmes, please visit <link http: www.boehringer-ingelheim-stiftung.de>www.boehringer-ingelheim-stiftung.de.
Press contact for further information
Dr Ralf Dahm
Institute of Molecular Biology gGmbH (IMB)
Ackermannweg 4, D-55128 Mainz
Phone: +49-(0)6131-39-21455, Fax: +49-(0)6131-39-21421
Email: <link>press@imb-mainz.de Press Release (<link file:1317 download file>PDF)
back