Mainz, March 2013.Prof. Helle Ulrich, a Scientific Director at IMB, has been awarded a highly prestigious ERC Advanced Grant. The €2.5 million award will enable Prof. Ulrich to develop cutting edge methods and approaches with which to study the mechanism that allows cells to accurately replicate even though their DNA is damaged. When DNA is replicated it is vulnerable to decay; the ability of cells to deal with this stress is a major factor in protecting our genomes from instability and cancer. A key mechanism allowing cells to overcome such damage is DNA damage bypass and post-replication repair. However, this process has to be very tightly regulated as it can itself lead to genomic instability if not correctly controlled. Prof. Ulrich will investigate how this regulation occurs by developing new methods and technologies that will allow her to introduce DNA damage at specific locations in cell genomes. How this damage is processed will subsequently be imaged in live cells. 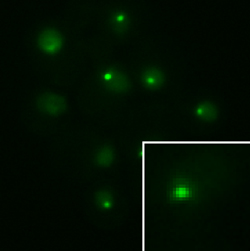 Particular attention will be paid to determining how post-translational modifications of the DNA-clamp protein PCNA coordinate the process of post-replication repair in conjunction with other interacting proteins. The award will fund this research for five years and will support a total of three postdoctoral researchers, two PhD students and a technician.  As part of the project, new methodology will be explored to introduce DNA damage site-specifically into the genome of budding yeast cells. A fusion of green fluorescent protein (GFP) to the bacterial TetR protein marks an array of damaged sequences within yeast nuclei.Further details
Further information about Prof. Ulrich’s research can be found at <link http: www.imb-mainz.de ulrich>www.imb-mainz.de/ulrich. ERC Advanced Grants support projects that are highly ambitious, pioneering and unconventional. They are awarded to recognised research leaders proposing projects with the possibility of producing major breakthroughs of importance to a wide range of fields. More information about the award scheme can be found at <link http: erc.europa.eu advanced-grants>erc.europa.eu/advanced-grants. Institute for Molecular Biology gGmbH (IMB)
The Institute of Molecular Biology gGmbH (IMB) is a new centre of excellence in the life sciences which was established in March 2011. Research at IMB concentrates on three cutting-edge areas: epigenetics, developmental biology and DNA repair. The institute is a prime example of a successful collaboration between public authorities and a private foundation. The Boehringer Ingelheim Foundation has dedicated €100 million for a period of ten years to cover the operating costs for research at IMB, while the state of Rhineland-Palatinate provided approximately €50 million for the construction of a state-of-the-art building. For more information about IMB please visit: <link http: www.imb-mainz.de>www.imb-mainz.de.  Boehringer Ingelheim Foundation
The Boehringer Ingelheim Foundation is an independent, non-profit organisation committed to the promotion of the medical, biological, chemical and pharmaceutical sciences. It was established in 1977 by Hubertus Liebrecht (1931-1991), a member of the shareholder family of the company Boehringer Ingelheim. With the “PLUS 3” Perspectives Programme and the Exploration Grants, the foundation supports independent group leaders, it endows the internationally renowned Heinrich Wieland Prize as well as awards for up-and-coming scientists. In addition, the foundation has endowed €100 million over a period of ten years to finance the scientific running of the Institute of Molecular Biology (IMB) at the University of Mainz. For more information about the foundation and its programmes please visit <link http: www.boehringer-ingelheim-stiftung.de>www.boehringer-ingelheim-stiftung.de. Press contact for further information
Dr Ralf Dahm
Institute of Molecular Biology gGmbH (IMB)
Ackermannweg 4, D-55128 Mainz
Phone: +49-(0)6131-39-21455, Fax: +49-(0)6131-39-21421
Email: <link>press@imb-mainz.de Press Release (<link file:1301 download file>PDF)
back